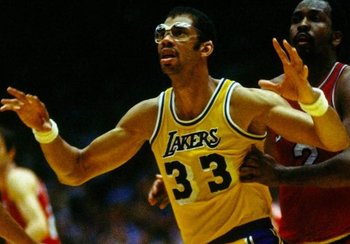 The Captain
"Arguably the best basketball career ever. From grade school to high school to college to the NBA, there has never been a more dominant player that I’ve ever seen."
— Isiah Thomas, legendary point guard for the Detroit Pistons
Advertisement:

Kareem Abdul-Jabbar (born Ferdinand Lewis "Lew" Alcindor in April 16, 1947) is a former NBA all-star and current author, actor, and activist. A center for Milwaukee Bucks from 1969 to 1974 and later with the Los Angeles Lakers from 1975 until his retirement in 1989, Abdul-Jabbar still leads the league in all time points scored and games won. With a record total of 6 MVP awards, 19 NBA all-star callings, and 6 championships, combined with his unstoppable court presence and one of the most distinguished college careers in basketball history, Kareem is a very serious contender for the greatest basketball player of all time. As a result, he's a pop culture giant (no pun intended) and one of the most recognizable players the NBA has ever produced. His most distinctive features are his gargantuan height — at 7' 2'', he towers even over most other basketball players — as well as his nearly unblockable signature skyhook shot, the distinctive goggles he wore to protect his scratched corneas, the afro he sported in his younger days, and his conversion to Islam in 1968. Much like fellow sportsman Muhammad Ali, the conversion and subsequent name change led to some backlash and career difficulties.

His acting career boasts a few small, but notable roles, such as Hakim in Bruce Lee's Game of Death (for which he was trained in Jeet Kune Do by the man himself), and Roger Murdock in Airplane! (a character who repeatedly denied being Kareem Abdul-Jabbar). He was more or less the Special Guest in TV shows in the 90s.

Off the court, Abdul-Jabbar is a rather understated figure. Camera-shy with a notorious discomfort with his fame, he mostly avoids the public eye, with hobbies such as coin collecting and detective fiction, the latter of which produced a highly acclaimed prequel novel to the the Sherlock Holmes stories, starring Sherlock's brother, Mycroft. His political activities have mainly included advocating on behalf of college athletes, and offering cultural commentary on matters of race and religion.

Alongside Michael Jordan and Bill Russell, Abdul-Jabbar is one of only three professional basketball players to have received the United States' highest civilian honor: the Presidential Medal of Freedom.