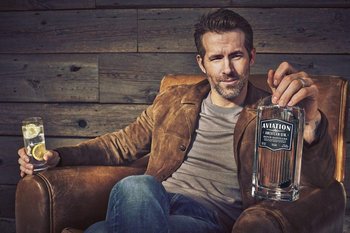 "An American original...now owned by a Canadian."
"You know, people come up to me all the time and they say, 'What makes Aviation Gin so delicious?' Most of the time I run away 'cause non-celebrities scare me. But here...is the answer."
—Ryan Reynolds
Advertisement:

In 2016, Ryan Reynolds got a hell of a Career Resurrection and a new bout of fame portraying the titular Merc with the Mouth in Deadpool. Earning a lot more money than he ever did, he decided to pursue his personal passion project of owning his own gin label and in 2018 chose to buy a share of Aviation American Gin

, which itself got a hell of a boost in name with Reynolds now an owner.

Besides the obvious, we mention Deadpool because at this point, Reynolds is Deadpool and it's better to just let him do whatever the hell he wanted with marketing. Hence, when he bought Aviation, he proceeded to go full Wade Wilson with how he intended to promote his product: making a total ass of himself and just going full meta.

A lot of these ads, mostly starring and narrated by the man himself, can be found on Reynolds' own Youtube channel here