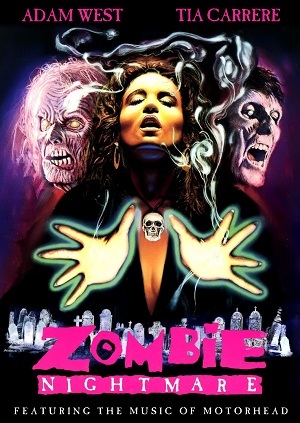 Our film opens in a time supposedly in the 1960s or so, showing us a softball game led by a beefy guy named Bill (played by writer John Fasano). Bill's the center of activity in the community, and he's even brought his family (wife and young son Tony) to the game. Unfortunately, a couple ne'er do wells are also in attendance and decide to stalk and assault Molly Mokembe, a young Haitian woman (played by Manoushka). Bill stops the crime in progress, saving her, but the two thugs fatally stab him and flee, all in front of his son.

Flash forward to the present day, and Tony is all grown up (now played by Jon-Mikl Thor), playing softball on the same field. That evening, he becomes a hero in his own right, foiling a convenience store holdup. Unfortunately, as he walks outside, he's the victim of a hit and run courtesy of a bunch of idiot kids, one of whom is the son of the thugs that killed his father.

Aggrieved, his mother decides to go for extrajudicial justice, calling upon Mokembe to do some form of voodoo to catch the (presumably unknown to her) culprits. This results in the animation of a zombie whom gradually hunts down not only the kids but also the two thugs from the beginning of the movie... one of whom is now an upstanding pillar of the community!

Like The Horror of Party Beach and The Incredibly Strange Creatures Who Stopped Living and Became Mixed-Up Zombies, this is another movie gadding about calling itself a horror musical, but it's got even less than those two on which to stake the claim; there is plenty of incidental metal music on the soundtrack, but no actual musical numbers. Oh, and Adam West is in it, too. Neat, huh?

I Am Thor will serve as his biography. He also has a trope page.

The film was riffed in a sixth-season episode of Mystery Science Theater 3000. The episode page can be found here.