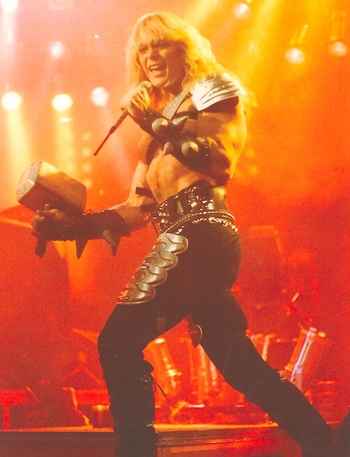 Thor is a Canadian Heavy Metal band formed in 1977. For its entire run, the band has been lead by frontman Jon Mikl Thor and could easily be considered as just him with a backing band. As the name suggests, their music draws heavily from Norse mythology (and helped develop what would come to be known as Power Metal) and their live shows also include Jon Mikl Thor doing various tricks such as bending a steel bar with his teeth and blowing up a hot water bottle until it bursts.

Though they've never really seen any major success, they've managed to gain a cult following and have inspired several other bands, most notably Manowar.

Jon Mikl has also had careers in body building and acting, having starred in, wrote and produced the horror movie Rock 'n' Roll Nightmare. Zombie Nightmare, a movie he co-starred in and wrote the score for, was roasted on Mystery Science Theater 3000. He also released an auto-biographical documentary entitled I Am Thor in 2015

"Only the strong shall trope!"