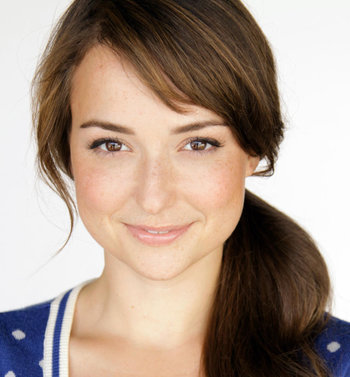 Born to a Jewish family in the former Soviet Union state Uzbekistan, Vayntrub emigrated to the United States at the age of three, and began her acting career as a child in Barbie commercials for Mattel. She then followed up with small roles in television shows like ER, Days of Our Lives, and Lizzie McGuire.

Considering her acting origin, it's perhaps appropriate that Vayntrub is best known for appearing as amiable salesperson Lily Adams in various TV spots for AT&T since 2015. She also starred in the science fiction/comedy series Other Space as Tina Shukshin, and held a recurring role in the first season of NBC's This Is Us as Sloane Sandburg.

In 2017, it was announced that Vayntrub was cast as beloved Marvel Comics heroine Squirrel Girl in the superhero sitcom New Warriors, based on the superteam of the same name. The series, like many others produced by Marvel Television, would've been set in the expansive Marvel Cinematic Universe. It was expected to premiere in 2018, but has since been cancelled. To make up for it though, Marvel allowed her to voice Squirrel Girl in in the Marvel Rising series.

Aside from acting, Vayntrub is a vocal supporter of war refugees, having fled her native Uzbekistan after the collapse of the Soviet Union with her family as a child for being a religious minority.