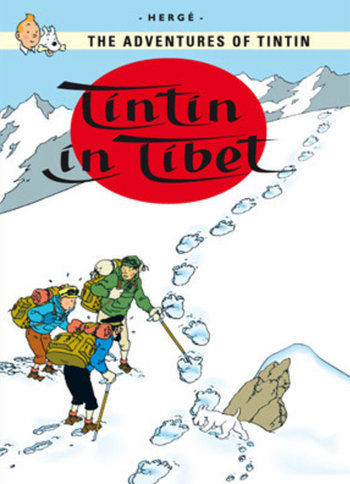 While on holiday in the French Alps, Tintin reads about a plane crash in the Gosain Than Massif in the Himalayas. That evening at their hotel, Tintin has a vivid dream that his friend Chang Chong-Chen is terribly hurt and calling for help from the snowy ruins of a plane crash. The next morning, Tintin reads in the paper that Chang was aboard the plane that crashed in Tibet. Believing that his dream was a telepathic vision, Tintin flies to Kathmandu in Nepal with Snowy, followed by a skeptical Captain Haddock. They hire a sherpa named Tharkey, and, accompanied by some porters, travel overland from Nepal to the crash site in Tibet.
Advertisement:

Upon entering Tibet, they discover footprints in the snow that Tharkey claims belong to the yeti. The porters abandon the group in fear, and Tintin, Haddock and Tharkey go on and eventually reach the crash site. Tintin sets off with Snowy to try to trace Chang's steps, and find a cave in which Chang carved his name (張仲仁) on a rock, proving that he survived the crash.

Tharkey decides not to go on any further, believing Chang to be dead, but Tintin, Snowy and Haddock travel on after Tintin spots a scarf higher up on a cliff face. Following Tintin, Haddock loses his grip and hangs perilously down the cliff wall. He tells Tintin to cut the rope tying them together to save himself, but Tintin refuses. Tharkey, who was moved by Tintin's selflessness and had a change of heart, returns just in time to save them. They trek onwards, unable to sleep lest they freeze, and eventually arrive within sight of the Buddhist monastery of Khor-Biyong before collapsing due to exhaustion. An avalanche occurs, and they are buried in the snow.

Blessed Lightning, a monk at the monastery, 'sees' in a vision Tintin, Snowy, Haddock and Tharkey in peril. Up in the mountains, Tintin regains consciousness and, unable to reach the monastery himself, writes a note and gives it to Snowy to deliver. However when chewing a bone Snowy loses the message, but runs to the monastery to make someone follow him. The monks head after him as he is recognised as the white dog in Blessed Lightning's vision.

Days later, Tintin, Haddock and Tharkey awaken in the monastery and receive an audience with the monks. After Tintin tells the Grand Abbot why they are there, the Abbot tells him to abandon his quest and return to his country. However, Blessed Lightning has another vision, through which Tintin learns that Chang is still alive inside a mountain cave, but that the "migou", or yeti, is also there. Haddock doesn't believe the vision is genuine, but Tintin, after being given directions by the Abbot, travels to Charabang, a small village near the Horn of the Yak, the mountain mentioned by Blessed Lightning. Haddock initially refuses to follow Tintin anymore, but once again changes his mind and pursues him to Charabang. The two of them and Snowy head to the Horn of the Yak on the final leg of their journey.

They wait outside until they see the yeti leave the cave. Tintin ventures inside and finally finds Chang, who is feverish and shaking. The yeti returns to the cave before Haddock can warn Tintin, and he reacts with anger upon seeing Tintin taking Chang away. As he reaches toward Tintin however, he sets off the flash bulb of Tintin's dropped camera, which scares him away. Tintin and Haddock carry Chang back to the village of Charabang, and he explains to them that the yeti saved him after the crash and took him away from the rescue parties.

Tintin, the Captain, and Snowy bring Chang back to Khor-Biyong, and after a week, when Chang has recovered, they return to Nepal by caravan. As their party travels away from the monastery, Chang muses that the yeti is no wild animal, but instead has a human soul, while the yeti sadly watches their departure from a distance.

The story came about in part because Hergé was still searching for Zhang Chongren, having lost contact with him after he returned to China due to World War II and the Chinese Revolution. Producing the issue became very difficult for him because he was undergoing a deep personal crisis a the time: His marriage was on the rocks, but as a former boy scout he felt obliged to stay with his first wife while already spending most of his time with the woman who would eventually become his second, a colorist at his studio. The psychoanalyst he consulted even advised him to abandon work on the album, but luckily for the readers he persevered. Many people consider Tintin in Tibet Hergé's most personal book.

Notable for its portrayal of a true-to-mythology Yeti, with a high pointed skull, brown fur, and unusual big toed-feet. This is in part due to Herge's friendship with none other than Bernard Heuvelmans, the man who pioneered the practice of Cryptozoology (the hunt for legendary animals like the Yeti and sea serpents), who provided information on the Yeti for the book.