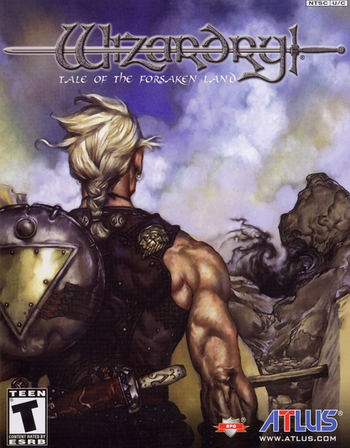 The city of Duhan prospered under the gentle care of Queen Otelier. One day out of nowhere a great explosion happens over the city destroying everything and killing many, an event that went to be known as The Flash. Cold weather and a perpetual snow cover the land. The survivors left to sort out what happened, reclaim what they had lost, and explore the mysterious labyrinthine dungeon that has appeared under the ruins of the castle.
Advertisement:

One day a mysterious wanderer enters the town, with no memories of who they once were, and is approached by a mysterious warrior with pale hair and sharp blue eyes, who tells them they will be the one to reach the bottom of the labyrinth and bring peace back to the land. And so the tale unfolds.

Wizardry: Tale of the Forsaken Land is a Role-Playing Game that was created by Racjin and published by Atlus in 2001 for the PlayStation 2.

Wizardry: Tale of the Forsaken Land bears much in common with the early Wizardry games I-V. A small set of races and classes, with advance classes such as the knight or bishop having entry requirements. It made a few changes and brought in new ideas, such as maps with curved and angled paths, and a party trust system.

A sequel, Busin 0: Wizardry Alternative Neo, was released in 2003 in Japan and nowhere else, due to the poor reception of the first game.

Wizardry: Tale of the Forsaken Land contains examples of: