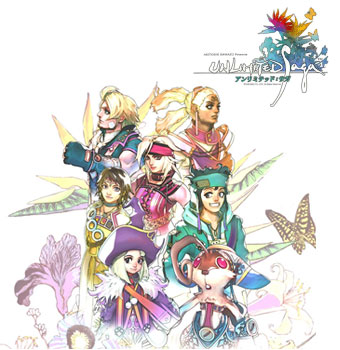 Unlimited Saga is an Eastern RPG developed and published by Square Enix for the PlayStation 2 and released in 2002. It is the ninth game in the SaGa series, and the only one without the series' traditional capital 'G' in the title.

In the lush fantasy world of Unlimited Saga, there is a prophecy that states that when the power dwelling within the Seven Wonders Of The World is released, a god will awaken and usher in a Golden Age. The game tells the stories of seven heroes who set out on their own individual quests across this land, which brings them into contact with the Seven Wonders.

The heroes are: Armic, a rodent-like "Chapa" who is selected to go a quest to save his tribe from a drought; Judy, a young witch out to save her family from the clutches of a jealous rival; Kurt, a former knight with a mysterious cursed gauntlet; Laura, an ex-pirate who is currently aiding a royal heir; Mythe, a talented blacksmith who is searching for a beautiful woman he became infatuated with; Ruby, who tags along with her fortune-teller sister to discover the truth behind a sinister prediction; and Ventus, a young man who became a courier to track down the murderer of his brother.

The game itself uses a distinctive "Tabletop Games" set-up, where you move the piece representing your party across the map and fight monsters, dodge traps and search for treasure along the way. The key mechanic is the controversial "Reel System": for almost every action, you spin the reel and try to stop it on a "Success" panel. In battle, this also determines if you get a critical hit, a special move or even cast the right elemental effect for spells. However, in practice the Reel System was a horribly unbalanced mess, often including far too little "Success" panels and reducing the timing to a Luck-Based Mission.

What exacerbated this effect was the fact that you only get a certain number of "moves" per map, with constant failures sucking up your available moves and eventually forcing you to re-do the entire map from the start. There was also the incredibly complex and unintuitive Character Customization system that frequently forced you to take a hit to your stats even if you managed to figure out the mechanics, and (like everything else in the game) also relied on the unbalanced Reel System for upgrades. The seven heroes also had natural strengths and weaknesses which were not always complemented by the upgrade options available to you.