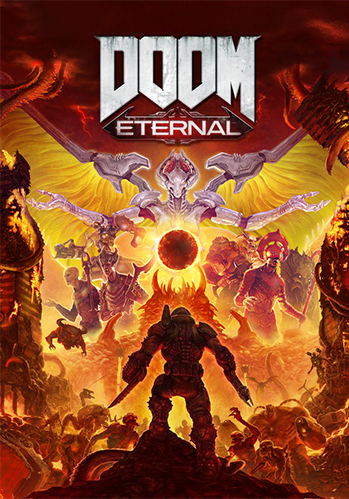 DOOM Eternal is the Sequel to DOOM (2016), developed by id Software for PC, PlayStation 4, Xbox One and Google Stadia as the sixth main installment in the Doom video game franchise. Officially released on March 20, 2020note Video game retailer GameStop in the United States began selling it a day earlier due to the COVID-19 Pandemic in an effort to separate crowds buying this game from crowds buying Animal Crossing: New Horizons, which was released on the same day, the Nintendo Switch version was released on December 8 as digital only. PlayStation 5 and Xbox Series X|S versions were release June 29, 2021, with free upgrades made available to owners of the PS4 and Xbox One versions.

You once again play as the silent, unnamed berserker-packin' man and a half in his suit of grey-green Powered Armor. It's been some time since you were sent on an extended trip to parts unknown as your "reward" for ripping and tearing through a demonic invasion on Mars, and without you around, things have gotten much worse. The Legions of Hell have invaded Earth, but it's not just them you have to worry about now. The angelic Maykrs of the divine realm of Urdak, led by the Khan Maykr, have forsaken humanity, and they aren't about to let you interfere in the affairs of Heaven.

Now it's up to you to protect the few surviving pockets of mankind scattered across the solar system from Heaven and Hell, the only way you know how: with guns, chainsaws, powered armor, and your bare hands, slaughtering everything that stands between you and saving humanity. Never resting. Never stopping. Ravenous. Everlasting. Eternal.

Rip and tear, until it is done.

The legions of Hell have invaded. Earth is falling. Humanity is dying. Time to get to work.

Example of:
After the End

The legions of Hell have invaded. Earth is falling. Humanity is dying. Time to get to work.