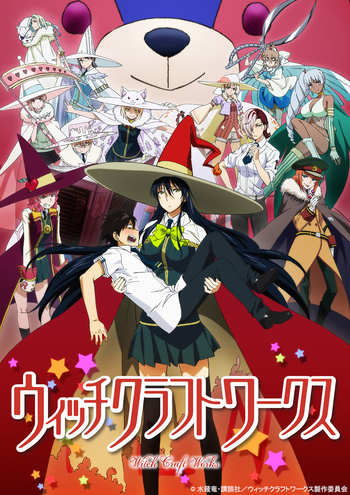 There's a princess in this picture, but it's not who you think it is.
Advertisement:

Witch Craft Works is a seinen manga about Takamiya Honoka, an ordinary student who sits next to Kagari Ayaka, the most popular girl in school. Their interactions are limited because her fan club assaults him for simply speaking to her. But when the school's clock tower falls towards Takamiya, Kagari rescues him while flying on a broom. She proceeds to incinerate some strange rabbit monsters and reveals that she is a witch, he is her princess and her mission is to protect him.

The manga ran in Kodansha's Good!! Afternoon magazine from 2010 to 2021. An anime adaptation aired as part of the Winter 2014 Anime season. The anime can be viewed here

For a series with a similar premise but very different tone, see Shakugan no Shana.