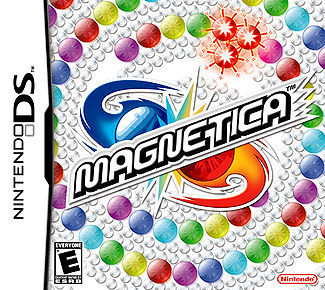 Released in 2006 for the Nintendo DS, Magnetica is a Puzzle Game based on the arcade game PuzzLoop and the more well-known Xbox Live game Zuma.
Advertisement:

In the game the player uses the touch screen to rotate a marble launcher at the bottom of the screen to launch colored marbles at a path of rolling marbles. Matching three marbles will make them disappear. The game is over if the marble chain reaches the center. Unlike PuzzLoop and Zuma, this game contains power-ups which can be accessed by scoring under certain criteria. The game was known as Shunkan Puzzloop in Japan and as Actionloop in Europe.

In 2008, a WiiWare port known as Magnetica Twist was released which more closely copied the PuzzLoop control scheme while also letting you play as your Mii.