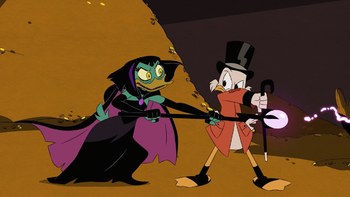 A long-awaited clash between the Sorceress of the Shadows and the World's Greatest Adventurer.
With Magica freed from her magical prison and unleashing an army of shadows, the Duck family races against time to plan a dangerous rescue mission to save Duckburg from her shadowy grasp... and Uncle Scrooge as well.