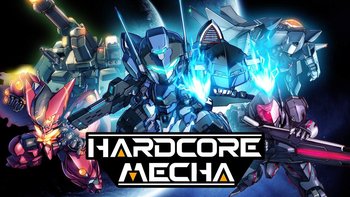 Hardcore Mecha (originally Code: HARDCORE) is a 2D action-platforming Mecha Game in development by Beijing-based indie studio RocketPunch Games. The game features a campaign mode following a conflict between Martian colonists and the Earth military as one of several unique pilots who can use one out of fifteen available, highly-stylized Mecha. In addition, a multiplayer mode of upwards to four players can compete against one another.

By the year 2219, humanity has been existing under the singular banner of the New United Nations (NUN), who has stretched out as far as the colonies established on Mars. The game follows the footsteps of Tarethur O'Connell, a mercenary pilot working for the Hardcore Corporation, and soon both him and his employers find themselves involved in a conflict between the NUN and the Steel Dawn, an insurgency movement bent on liberating Mars.

The game was funded via Kickstarter and was released in Asia on PC via Steam and PlayStation 4 in June 2019, with a Western release following on January 14, 2020.