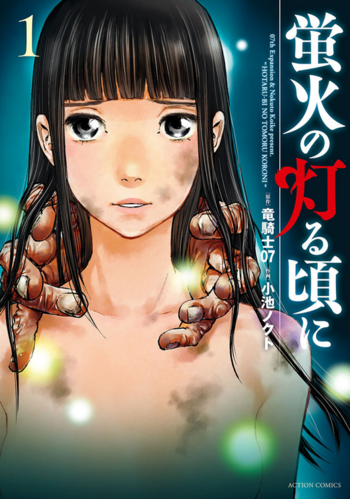 It was supposed to be just a boring visit to the village...
Advertisement:

In July 2016, the Tadamura family gathers for the funeral of their grandmother, in the small mountainous village of Hirasaka. Her three sons Masashi, Nobuteru and Tsunemasa, plus their children Yue (Masashi's step-daughter), Yukito (his son), and Terumi and Teruya (Nobuteru's daughter and son), all come to pay their last respects.

The very demure Yue has some trouble fitting in the family; it doesn't help that her mother disappeared after she and Masashi ate up all of the grandmother's inheritance money in a careless business venture, which poisoned the relationship between the brothers.

But all that is put aside when inexplicable events start to occur that night: Yue sees the grandmother's dead body being seemingly dragged away into the night by some invisible force. The next morning, the family wakes up in a deathly silence, the power is out, two suns shine above their heads, and the village is surrounded by a strange barrier made of poisonous mist. And things only get worse from there.

Hotarubi no Tomoru Koro ni (When the Fireflies Glow) is a 4 volume manga written by Ryukishi07 and drawn by Koike Nokuto (known for 6000 and Kuromachi) in the seinen magazine Monthly Action between 2016 and 2018. While it is related to the When They Cry series and the initial setting is reminiscent of both Higurashi and Umineko, the story this time leaves out the murder mysteries, being instead a survival horror with more overt supernatural elements, but more realistic visuals and character designs. Another notable difference is that all the characters are adults − the youngest one, Yue, is 19 years old, while Yukito and the cousins are in their mid-20s.

The series was preceded by a short novel prologue called The First and the Last Gift, introduced by the Witch of Certainty Lambdadelta and starring Takano Miyo, who visits Hirasaka many years before the story of the manga. It can be read here.

The manga got a French release by Komikku in 2018.