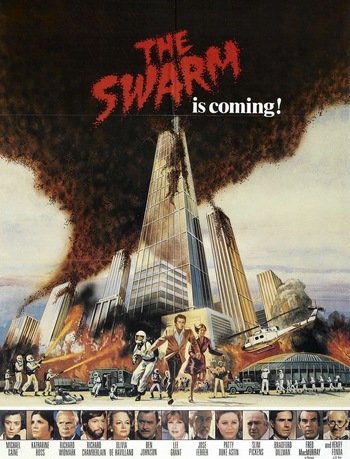 Irwin Allen brings you the ultimate bee movie.
"Irwin Allen "won" a 1984 Worst Career Achievement Razzie naming him "The Master of Disaster". And The Swarm is the single biggest disaster on his less-than-distinguished résumé. (...) Under Allen's firm hand, and despite the enormous production budget, The Swarm turned the tale of an invasion of killer bees into the ultimate B movie."
—The Official Razzie Movie Guide
Advertisement:

The Swarm is a 1978 Disaster Movie produced and directed by Irwin Allen, adapted from a novel of the same name by Arthur Herzog.

Texas finds itself besieged by swarms of mutated African killer bees, and the U.S. Army — with the help of entomologist Dr. Brad Crane (Sir Michael Caine) — seek a way to stop them.