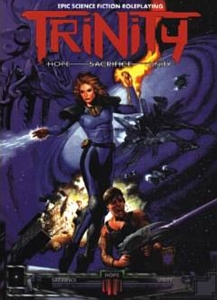 Æon (later Trinity, thanks to a run-in with MTV, who saw it as challenging trademarks on Æon Flux) is the first game in White Wolf's Trinity Universe, and the chronologically latest.
Advertisement:

Set in the 2120s, you play as a psion, one of a select few humans gifted with extraordinary psychic abilities standing in humanity's defense, not least against the monstrous Aberrants, who seek to reclaim Earth as their own.

To become a psion requires having latent psychic potential. When the psi orders pick up on someone with the appropriate potential, they test them according to each order's own particular set of standards, then put them through a Prometheus Chamber, which triggers their latent abilities. A considerable number of psions stick with an order after triggering, though not all.

Each psi order is based in a particular geographical region, specializing in a particular type of Psychic Powers, and modeled on a type of organization - if they're not one in practice. Each order is headed by a proxy, a psion with abilities above and beyond those of their fellows.

The psi orders are:

Received a second edition as Trinity Continuum: Æon, which changes up some things, and had a successful Kickstarter in February 2018.

If you're looking for the band, they're here.