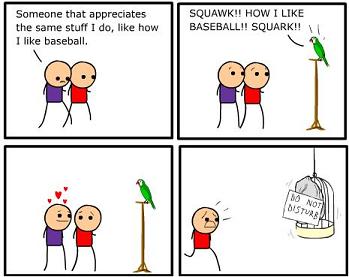 Looks like Polly just scored herself a cracker.
"Rick, I knew you were a vile, DISGUSTING degenerate, but bestiality?! This goes beyond my wildest dreams!"
— Ed Thompson, Bachelor Party

Want to mark a character as a sexual deviant, but don't want to run into the Unfortunate Implications / Prejudice Tropes that tropes like the Depraved Homosexual or Bisexual or the Psycho Lesbian have? Not quite up for the moral gravity of tropes like Rape Is a Special Kind of Evil, Villainous Incest, or Pædo Hunt? Simple. Imply that they have a sexual interest in animals. Preferably farm animals, since common pets still might be a bit too squicky for some.

This is almost always played for laughs, rather than titillation. It works partly because actual bestiality is rare enough to seem less "real" than other acts considered perverted, similar to the unreality of cartoon violence — yet common enough that it's more plausible (and seen as less gross by observers, it also doesn't have the same repulsive moral implications) than necrophilia. We don't normally worry about the animal, because of said unreality and our moral distance from animals. It helps that the animals in question are not anthropomorphized and are usually the more "comical" ones found in nature (goats, sheep, chickens).

You may get a couple of letters from PETA and a severe hoof-to-the-head concussion, but frankly you should just expect that going in.

This trope also shows up in regional humour as a way to mock other regions that are considered Acceptable Targets. For example, in Britain, jokes of this sort (especially regarding sheep) commonly get levied at Wales and Scotland. Meanwhile in the Southern Hemisphere, Australians and New Zealanders like to accuse each other of excessive fondness for sheep. (As you may have guessed, sheep farming makes up a big chunk of the economy in Wales, Scotland, Australia, and New Zealand, all of which have higher populations of sheep than humans.) Latin Americans get this a lot too, especially with regards to donkeys. Sometimes also alleged toward Bedouins and other groups who have long nights alone in the desert with no company except goats and camels. The American version is usually aimed at "rednecks" from the Deep South, although the rural Midwest and northern New England get some ribbing too. In Russia, the regions most commonly accused of this are the Caucasus and Central Asia. Germany's target of choice is Austria; Austria's target of choice are people from Vorarlberg, Tyrol and other rural alpine states.

In some countries, amusingly, this stereotype came about due to how the punishment for theft of livestock was more severe than the punishment for being caught committing bestiality. Naturally, you can guess what some would-be cattle/sheep rustlers would rather confess to in court.

For the trope where people remember something naughty the character did and nothing else about the character who did it,note i.e. the former name of this page, "But You Screw One Goat!" see Never Live It Down for Audience Reaction examples and Once Done, Never Forgotten for In-Universe examples.

Compare Extreme Omnisexual. A Subtrope of Unequal Pairing. If biology works like that in their universe, it may lead to a Half-Human Hybrid.

Bestiality (also called Zoorasty) is actually the word for sex with animals; sexual interest is called Zoophilia or Zoosexuality.

Not to be confused with Interspecies Romance, where the two participants are both intelligent creatures, though sometimes such a romance is treated in-universe as if it was this trope due to Fantastic Racism. The Furry Fandom tends to get upset when people confuse the two, and you can't blame them - they actually do ostracize genuine zoophiles inside or outside their community.

No Real Life Examples, Please! The ones in fiction can be disturbing enough as it is.

Alternative Title(s): With A Goat, You Screw One Goat, Bestiality Is A Special Kind Of Perversion