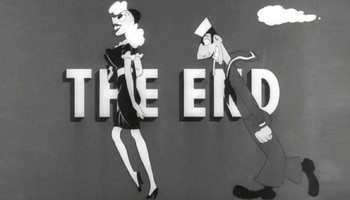 A whole new meaning to The Sea Wolf
"The happiest hour a sailor sees
Is when he's down in an inland town
With his Nancy on his knees, yo ho,
And his arm around her waist!"
— Gilbert and Sullivan, The Mikado
Advertisement:

At least, so you'd think from some fiction, where every single crew member on a nautical adventure seems to be in a constant state of hunger for, well, naughty adventure. In such works, sailor types are never shown as being apathetic about romantic horseplay—not even if they're exhausted from overwork, or stranded on an island.

This trope particularly runs rife in a Wooden Ships and Iron Men setting. Pirates are often involved as well, since they have the loot to spend lavishly on drinks, prostitutes, and A Girl in Every Port. But it can be and pretty much always has been applied to all kinds of seamen (heh heh, "seamen"), including the spacefaring variety.

For a long time, this was Truth in Television to some extent: historically, women were not allowed on naval ships in many countries, which meant that sailors spent months on end without seeing a member of the opposite sex. Naturally, upon reaching shore, many of them would be starving for female companionship. (Docks were long known as crucibles of prostitution.)

Now that the gender imbalance is less pronounced in most places, the whole concept is largely in Dead Horse Trope territory, but you can still expect to come across it in historical fiction (and, of course, older works). Hello, Sailor! is often the result of this trope plus Situational Sexuality. See also Our Sirens Are Different.