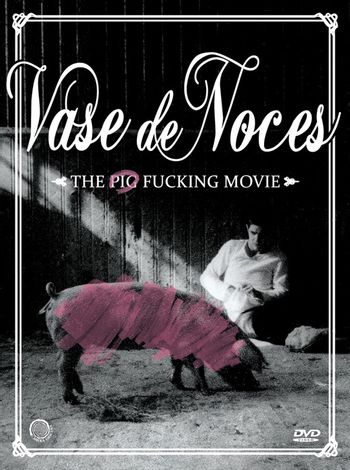 The cover of the less-than-common DVD.
Advertisement:

Vase de Noces (literally "wedding vase", known in English as "wedding trough") is a 1974 Belgian arthouse film directed by Thierry Zéno. Confined to a handful of film festivals for over three decades, with the curious forced to turn to a shabby bootleg torrent in order to witness it, nobody in the world would know this film existed were it not for the scenes in it in which a man sodomizes a pig.

Oh boy... how does one explain what this film is about? First things first, there is no dialogue in it, with the only sound being ambient farm noises, eerie church choir chanting, and some bizarre electrically-generated bleeps and bloops. For this reason, everything in it is left to interpretation... on a farm in what some speculate may be a post-apocalyptic wasteland, a lone, unnamed farmer (played by Dominique Garny) who may be the last man on earth lives with his sow. Amidst his daily activities, which include slotting the heads of dolls onto the heads of doves, and collecting what appears to be vegetable matter in jars for no apparent reason, the farmer falls in love with the sow. Although this love by all appearances seems to be unrequited, given the common title of the film and the aforementioned scene, it should be obvious where this eventually leads.

The sow gives birth to a litter of what are presumably human/pig hybrids (though they resemble ordinary piglets). The farmer attempts to raise these as civilized humans, knitting clothes for them and trying to teach them proper table manners, but he is unable to, and so... he hangs them. (And whilst the pig-fucking is simulated, said hanging of the piglets is not; and as people have pointed out, it is probably this, frankly, and not the pig-fucking that is the most reprehensible aspect of the film.) When the sow finds her offspring dead, she throws a fit and drowns herself. When the farmer finds her, he goes insane. He attempts to bury himself alongside her, and upon failing, he empties the contents of the jars he has been collecting and fills them with his own feces and urine instead. He then makes and consumes tea out of said feces and urine. Finally, he props up a ladder that appears to be supported in midair, and hangs himself. The end.

In 2009 the amazing, the unthinkable happened. The film was actually given an official DVD release by the German and Swedish companies Camera Obscura and Njuta Films. And according to blogs, said DVD contains an accompanying documentary in which the director and actor explain what the meaning of all this is. Though baffled viewers may be pleased to have their questions answered after 35 odd years, something tells us that the release isn't going to go down too well in the United Kingdom, Australia or the Islamic World... or anywhere else for that matter.