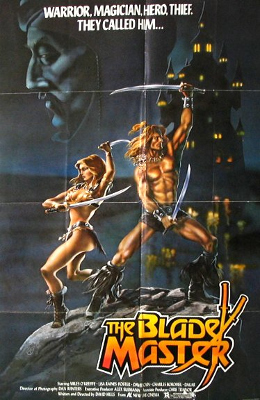 Ator l'invincibile 2 (released in English-speaking countries as The Blade Master, Ator, the Blade Master, Cave Dwellers, and The Return) is an Italian film that was made in 1984.

The movie was written and directed by Joe D'Amato. It stars Miles O'Keeffe as Ator, a man skilled in not only fighting, but in many other arts as well. It also stars Charles Borromel as Akronas, a wise ruler and teacher who is also called the Great One. Lisa Foster stars as Mila, the daughter of Akronas, and David Brandon as Zor — the principal villain of the film. The film was released in theaters as Ator the Invincible and later as Ator, the Blade Master. It received the name Cave Dwellers after it was re-edited by distributor Film Ventures International. It is the sequel to 1982's Ator l'invincible (with the English title Ator, the Fighting Eagle), which received the RiffTrax treatment in 2017 and appeared on MST3k itself in 2018.note The show likely skipped the original film the first time around due to highly uncomfortable material like Ator's romantic feelings towards the woman he thinks is his sister, and an Amazon tribe who plan to rape him, which never would have flown on TV in the early '90s. The third film was 1986's Iron Warrior, followed by Quest for the Mighty Sword (which was also released as Troll 3, one of three In Name Only sequels to Troll.) The movies were made to capitalize on the popularity of the Conan movies which starred Arnold Schwarzenegger.

The Blade Master has these examples: