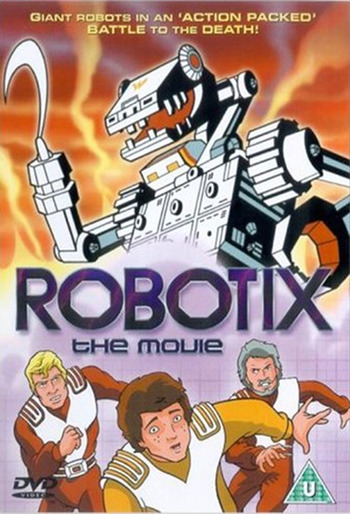 Robotix is a 1985 animated series based on the Milton Bradley/Hasbro toy of the same name. The original toy was of the construction type, similar to the Erector Set and K’Nex, that included motors, wheels, and pincers.

The series follows the conflict between the peaceful Protectons and the warmongering Terrakors on the alien world of Skalorr, and a group of humans who get caught up in the conflict. It was produced by Sunbow Entertainment and Marvel Productions, and was animated in Japan by Toei Animation, which also animated other cartoons featured on the Super Sunday block.

Unlike most animated shows, Robotix was not a 22-minute cartoon, but was rather a series of fifteen six-minute shorts that aired as part of the Super Sunday half-hour with other animated shows, including Jem and the Holograms, Inhumanoids and Bigfoot and the Muscle Machines. While Jem and Inhumanoids had enough success to be turned into full-fledged series, Robotix was cancelled after its debut season (as was Bigfoot).

Marvel Comics also produced a single-issue comic book in February 1986, which roughly followed the storyline of the first three episodes of the series.

Years later, the Transformers feature "Ask Vector Prime" would establish that the world of the Robotix is, in fact, a universe within the Transformers multiverse, and that the Protectons and Terrakors were distant dimensional analogues of the familiar Autobots and Decepticons. The Robotix got their long-awaited due shortly afterwards, starting in a short crossover adventure with the then-concurrent feature "Spacewarp's Log".