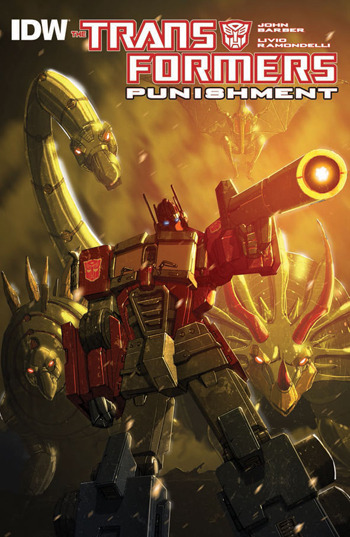 "You and the Dinobots are everything wrong with Cybertronians. All you ever were was a gun... and you have no ambition to be more. Even if you didn't pull the trigger yourself, it's creatures like you that create an environment where this happens."
— Optimus Prime
Advertisement:

A one-shot comic leading towards the events of Combiner Wars, taking place after the events of Issue 35 of The Transformers: Robots in Disguise, written by John Barber and with Livio Ramondelli on art duties.

Optimus Prime travels to Cybertron for an unfinished business and lands in the middle of a triple-murder mystery.

The Transformers: Punishment includes examples of: