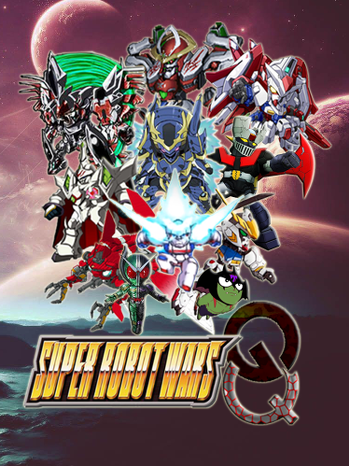 in This Very Wiki, that can be found on FanFiction.net

The world's known history began with the oppression of the human race under the Shadow Angels and eventual deliverance by the Mechanical Angel, Aquarion. Thousands of years after that, the Earth suffered Global Warming and as the seas began to rise, the humans looked to space for a solution. As the space colonies thrive and the Earth recovers from the natural disasters as artificial islands are created, the armed conflict that would later be known as the Calamity War erupted between them.

The war ended, the new After Disaster era began, and a One World Order with four independent power blocs were created, but in a few centuries, anti-government sentiments are on the rise again. The Shadow Angels have also reappeared and strange creatures from both beneath the Earth and outer space have shown themselves. Faced with not only insurgencies, but also natural disasters, ancient enemies, and aliens, the United Earth Sphere Alliance strives to control the chaos... at the cost of tyrannizing what they're supposed to protect.

What future awaits the Earth in this power struggle where everyone seeks to leave their own imprint?

Series included in GQ are: