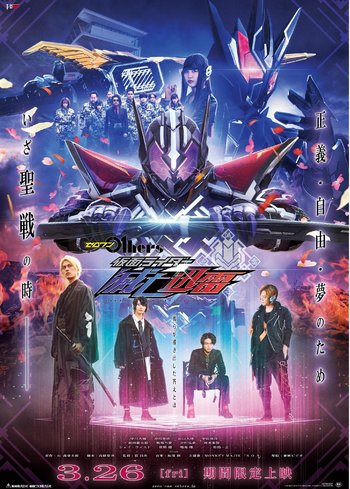 Taking place after REAL×TIME, ZAIA Enterprise American branch CEO Leon Arkland kidnaps Jin from MetsubouJinrai.net. In the chaos of losing him, the group encounters a large amount of new HumaGear models called "Solds," which are later revealed to also be a new generation of Magia. Leon intends to mass-produce these Solds and sell them worldwide, stirring up some War for Fun and Profit. Naturally, Jin isn't having any of this, and resolves to free them together with his allies.

Yet still, things are not as they seem. Something has clearly happened to Jin while he was in captivity, and Leon plans to unleash a new threat to humanity in a most surprising fashion...

Is followed up by Zero One Others: Kamen Rider Vulcan & Valkyrie.