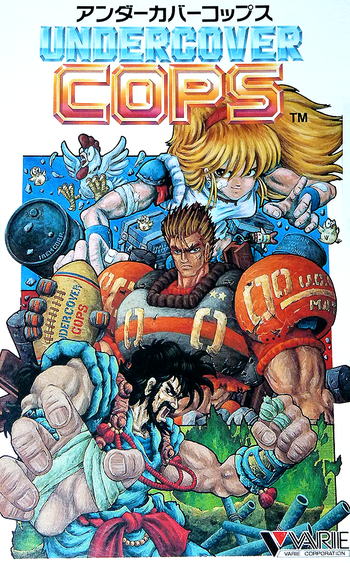 Undercover Cops is an arcade Beat 'em Up by Irem later ported on the Super Famicom, designed by most of the staff that would later make the Metal Slug series.

In 2043, a city is assaulted by the Mad Scientist Dr. Crayborn and his large gang of thugs. To counter this, the mayor hires a group of three professional "city sweepers" to clean the streets. They are:

Featuring the same detailed sprite art and subtle humorous touches later seen in Metal Slug, along with a large number of moves rivalling the likes of Violent Storm, this game is frequently seen as a classic by hardcore fans of the beat'em up genre. However, while it did find a cult success in Japan, it was impaired elsewhere by a severely gimped World release and no exports of the home version.

Later received a sequel on the Game Boy called Undercover Cops Gaiden, which is a turn-based board game instead of a Beat 'em Up, and a Super-Deformed manga adaptation by the infamous guro artist Waita Uziga.