Literature / The Year I Met You 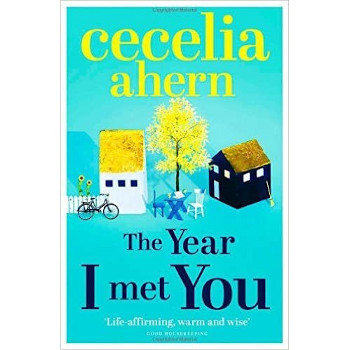 We all have stand-out moments in our lives, periods which influenced small or profound changes in us. Now I have a new one. The year I met you.
I couldn't tell anybody my dreams if they asked me right now, nor my hopes and desires. If I was asked to put a plan into action, I wouldn't know where to start.
I feel utterly lost.
—Jasmine
Advertisement:

Jasmine is a 30-year-old highly successfull, ambitious, very hard working career woman in Dublin, Ireland. The book starts when, to her utter shock, she's fired by her bussiness partner, who puts her on paid leave for a year while she's legally forbidden from working anywhere else during that yearnote This is called a "gardening leave" in Ireland, and thus in the book. For Jasmine this is the worst thing that could happen, since her work was her life. She now suddenly has lots of time to spend at home, and she realises she doesn't even know who her neighbours are.

Enter Matt, Jasmine's neighbour who's a radio talk show host. Matt's talk show is of the "shock jock" variety, thus his public persona is rude and antagonistic. Jasmine doesn't know Matt personally but has been intensely hating him for over 15 years after she heard him talk derigatory and mean about people with Down Syndrome on his show. Jasmine has a sister with Down Syndrome, Heather, whom Jasmine adores and is fiercely protective of, so she feels very strong about this.

Coincidentally, Matt has been fired at the same time Jasmine is, after finally taking his inflammatory remarks on his show too far. Thus they both are at home/their neighbourhood now, and they keep walking into each other. Jasmine wants nothing to do with Matt, but to her surprise and confusion, now that she first meets him, he's actually a nice person in real life.

Before they know it, and in spite of their differences, a friendship forms between Jasmine and Matt.

The book describes the full year of Jasmine's lay-off, starting in December, and is divided in four parts named after the seasons, starting with Winter.

Matt: [Asking about Kevin] Boyfriend?
Jasmine: God, no. [But] wants to be.
Matt: And you don't.
Jasmine: No.
Matt: Seems like a nice guy.
Jasmine: He's my cousin.
Matt: [Eyes widening] Jesus.
Jasmine: He was adopted.
Matt: Oh.
Jasmine: Still. It is and will always be disgusting to me.