Literature / How I Live Now 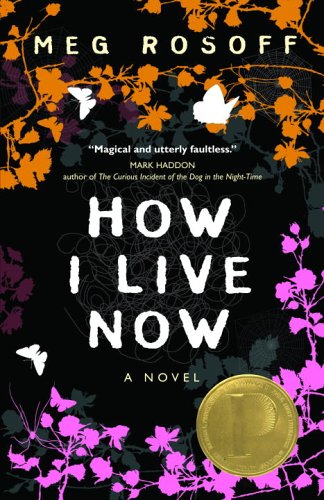 So there we are carrying on our happy little life of underage sex, child labour and espionage when someone came to visit us, which, after weeks of Just Us Five kind of took us by surprise, to put it mildly.
Advertisement:

After relations with her father and stepmother break down, Daisy, a cynical, unloved 15-year-old suffering from anorexia, is sent from New York to the English countryside, to stay with her cousins. Living in a beautiful, ramshackle house and blissfully free of teacherly or parental restraints, Osbert, Edmond, Isaac and Piper are a wild but gentle crowd, at least one of whom, Edmond, seems to have actual magical powers. Wary at first, Daisy is soon entranced by their small private utopia. But meanwhile the world slides towards war. The kids blithely ignore it at first, but horror and violence are drawing ever closer.

The novel incorporates tropes from fairy stories and classic children's literature (the death of Daisy's mother in childbirth, the carefree gang of unsupervised children romping about in a glorious English summer) into its ultimately more daring and provocative narrative.