Film / How I Live Now 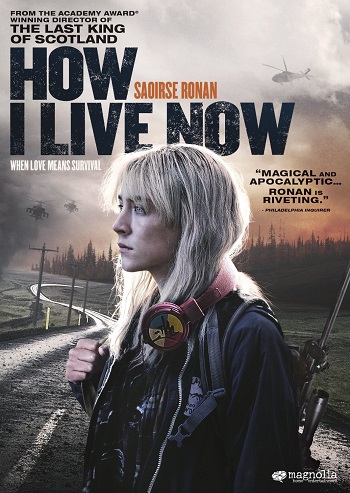 "Before the war I used my willpower for stupid stuff, like not eating chocolate. I think I thought if I could control myself, then maybe the world around me would start to make sense. I guess I was pretty naive back then."
—Daisy
Advertisement:

Daisy (Saoirse Ronan) is a cynical 15-year-old with unspecified problems who is sent from New York to the English countryside to stay with her cousins. Living in a beautiful, ramshackle house and blissfully free of teacherly or parental restraints, Edmond, Isaac, Piper and their friend Joey are a wild but gentle crowd, at least one of whom, Edmond, seems to have actual magical powers. Wary at first, Daisy is soon entranced by their small private utopia. But meanwhile the outside world slides towards war. The kids blithely ignore it at first, but horror and violence are drawing ever closer.