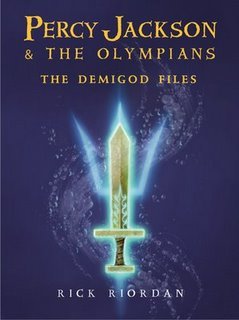 Study these pages well, for your own adventures have only just begun. May the gods be with you, young demigod!
Dear Young Demigod,
If you are reading this book, I can only apologize. Your life is about to get much more dangerous.
Advertisement:

The short story Percy Jackson And The Stolen Chariot is about when Percy joins a quest Clarisse La Rue was given by her father Ares. The quest being for Clarisse to take and bring back Ares war chariot. Unfortunately Clarisse's immortal brothers; who are Ares's usually charioteers, don't like it when anyone else gets to drive Ares's chariot and stole it. Thus forcing the two half-bloods to retrieve it.

The short story Percy Jackson And The Bronze Dragon takes place at Camp Half-Blood during a capture the flag game. During which Percy is paired with the counselor for the Hephaestus cabin and his capture the flag's team captain. Unfortunately in the game the two half-bloods discover the Myrmekes's nest and with them the remains of a old camp guardian.

The short story Percy Jackson And The Sword Of Hades begins with Persephone bringing the children of the big three (Percy, Thalia and Nico) together for a quest. The quest to retrieve a nearly finished sword, which has been stolen by a servant of Kronos. The three then race against time to stop the their and retrieve the sword before he can leave The Underworld.