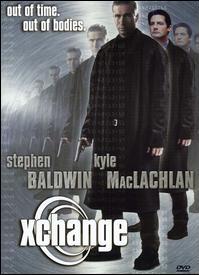 20 Minutes into the Future, new tech allows for people (usually business execs) to travel by swapping bodies with another person at their destination. The process is called "Xchanging" (after the name of the company) or "floating".

Stuart Toffler is a "corpie", who is sent by his boss to attend the funeral of a murdered business partner via Xchange. When it comes time to return to his own body, he learns that a criminal has absconded with his body. Worse: the body he's currently inhabiting actually belongs to yet another person, who wants it back. Toffler is offered the body of a temporary clone, who only live for a few days and are mostly used for temp menial labor. Unfortunately, the law forbids anyone from Xchanging more than two times per week, which means that Toffler only has a few days to live. In desperation, he flees with his current body, but ends up having to swap for a clone body after all.