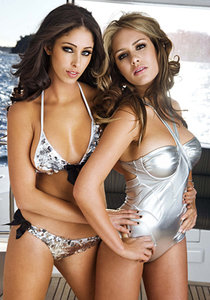 Scarlett Belle were an Australian pop and R&B Girl Group who, admittedly, weren't that famous, but its members were well-known enough to be considered something of a Super Group at first.

The group were signed to Island Def Jam in 2007 before releasing their debut single, "Closure", three years later. This song and their follow-up, "Freak Tonight", peaked inside the Top 40 singles chart, but their third single "Lover Boy" tanked, causing them to split a year later.