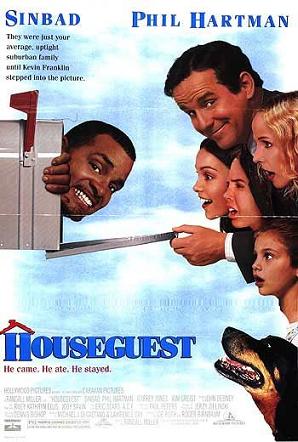 Houseguest is a 1995 comedy starring Sinbad and Phil Hartman (in his only leading role).

The basic premise of the film is this: Kevin Franklin (Sinbad), an unsuccessful 35-year-old man in living in Pittsburgh, tries to pull of a get-rich-quick scheme, using borrowed money from the mob to do so. Like all his other plans, it flops, so he tries to run for it when the mobsters come back for him. They catch up with him at the airport, whereupon he hears a man talking to his kids. The man, Gary Young (Hartman), is waiting for his childhood friend Derek Bond (Ron Glass), to visit him for the first time in 25 years. Young remarks that he doesn't know what Bond looks like now, except that he's black and in his thirties. Naturally, Franklin decides to pose as Bond and ends up spending a long weekend with them as their houseguest. All the while, he's trying to avoid the dim-witted mobsters sent after him while trying figure out exactly who he's supposed to be an impostor of in the first place. Hilarity Ensues, as you've probably guessed.