Film / The Return of Don Camillo 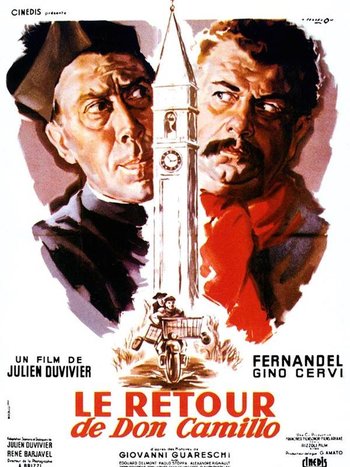 The Return of Don Camillo (Italian: Il ritorno di Don Camillo; French: Le Retour de don Camillo) is a 1953 Italian-French comedy film, the second in the Don Camillo franchise and the sequel to Little World of Don Camillo, directed once again by Julien Duvivier, starring Fernandel and Gino Cervi. It is adapted from a short story by Giovannino Guareschi. René Barjavel co-wrote the screenplay.

Don Camillo (Fernandel) has been exiled to a remote and bleak mountain parish by his bishop at the request of Peppone (Cervi). But the mayor of Brescello develops problems with the citizens of the town, who want Camillo back as parish priest. In addition, a flood threatens to destroy Brescello and its environs. So Peppone calls back the priest, and he tries to raise the money needed to prevent damage from the imminent flood.

Followed by Don Camillo's Last Round.

The Return of Don Camillo provides examples of: