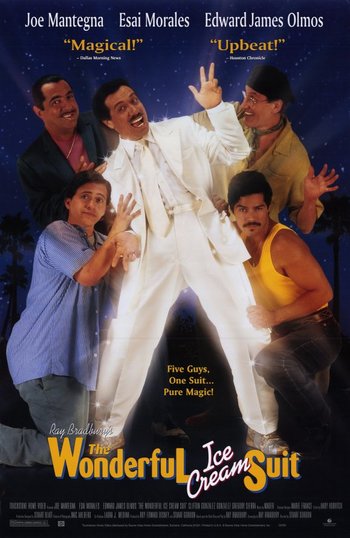 The Wonderful Ice Cream Suit is a 1998 comedy film adaptation of the short story and play by Ray Bradbury. It was directed by Stuart Gordon and stars Joe Mantegna, Esai Morales, Edward James Olmos, Clifton Collins, Jr. (credited as Clifton Gonzales Gonzales) and Gregory Sierra. It was produced by Walt Disney Pictures, initially released to video under the Touchstone Pictures label. Bradbury was also involved in the film adaptation, providing the screenplay.

Taking place in the Spanish suburbs down in East L.A, a man named Gomez (Mantegna) seeks out three down-on-their-luck strangers and convinces them to pool their money to buy a special luminescent vanilla ice-cream colored suit, a suit so powerful and illuminating that they believe it could change their lives and make all of their dreams come true.

Dominguez (Morales) wants to charm the ladies in town with his voice and music. Jose Martinez (Collins) wants to catch the attention of the lovely Girl Next Door who doesn't seem to notice him despite his efforts. Villanazul (Sierra) wants to capture a crowd and inspire them with his political and economic vision for the east side. But when the men don't still have enough money, they resort to the filthy bum Vamanos (Olmos) for the remainder of it.

With the suit in their hands, the five men spend the following evening taking turns wearing it, having one hour to themselves in hopes to turn their dreams into a reality. But what will become of them when they suspect Gomez, a Con Man, of running off to El Paso with the suit? Or worse, if the dirty and clumsy Vamanos ends up ruining it first?