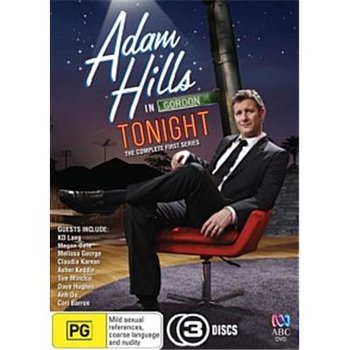 Adam Hills Tonight (formerly Adam Hills In Gordon Street Tonight) is an ABC television variety program which focuses on Adam Hills, a stand-up comedian and host, talking with interesting guests and a lot of fun with both them and the audience. Hills talks with a sequence of guests over the course of the program and the earlier guests stay on the stage (as on Parkinson) so that they interact with the later guests. And often the audience. Did I mention the Audience Interaction?

There are also musical acts who often perform live (and mixed to a very good stereo mix, too).

The name of the show comes from the fact that it is one of the ABC's older studio complexes, in Gordon Street in inner Melbourne. The show is currently in its third season.

Adam Hills rose to fame hosting Spicks and Specks, also on the ABC.