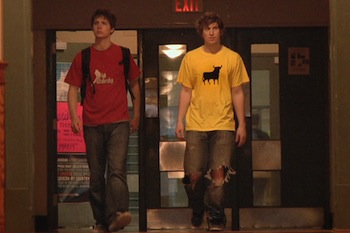 Owen and Matt.
"Two best friends are filming a comedy about getting revenge on the bullies at their high school. One of them isn't joking."
Advertisement:

Matt and Owen are two high school students making a movie about shooting the bullies that torment them daily. They finish their movie, show it to their film teacher, and discover they must completely rework it in order for it to be appropriate for class. While Owen loses interest in making the film and instead tries to woo the girl he likes, Matt becomes more and more obsessed with the idea of doing the movie, complete with a shooting scene, for real.

The entire film, with the exception of the last line, is improvised and was shot documentary-style with a tiny crew in real high schools.