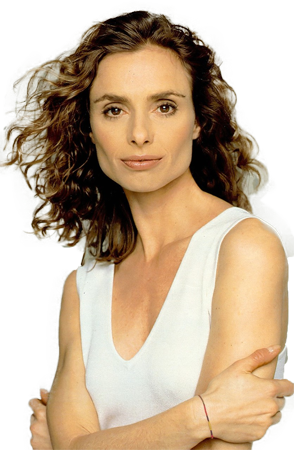 Maryam d'Abo (born December 27, 1960 in Hammersmith, London) is a British film, stage and television actress of Georgian and Dutch descent.

She's best known for playing cellist Kara Milovy in the 1987 James Bond film The Living Daylights, whose director John Glen would go on to cast her in several of his works. She was also the host and narrator for the 2002 documentary Bond Girls Are Forever, where former Bond girl actresses were interviewed about their experiences. She also had a main role in Something Is Out There, which NBC declined to renew.

She's the granddaughter of Giorgi Kvinitadze, a military commander and an important figure of the short-lived Democratic Republic of Georgia (1918-1921) who went into exile in France when the country was annexed by the Soviet Union. She's also the first cousin once removed of Olivia d'Abo, and she's been married to British director Hugh Hudson (of Chariots of Fire fame) since 2003.

She is fluent in French due to having been raised in Paris and francophone Switzerland, she started her acting career on stage in France in 1982. She recovered from an aneurysm in 2007, which motivated her to direct a documentary about other victims of aneurysm in 2009. She later did some modelling in her 50s and started painting (her works can be seen on her Instagram account).