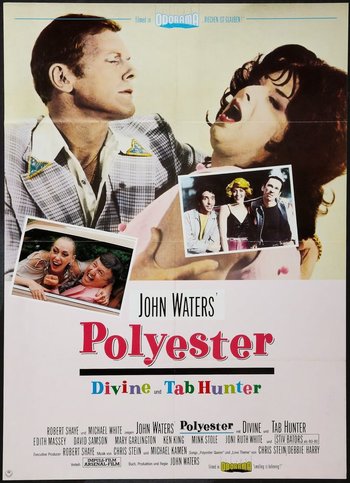 "It's Scentsational!"
Polyester is a 1981 film by John Waters. It stars Divine, Tab Hunter, and Waters' usual repertory cast. Polyester marked Waters' first steps towards mainstream cinema, which wouldn't reach its peak until his next film.
Advertisement:

The film boasted the use of scratch-and-sniff 'Odorama' cards, with the in-universe explanation being that Francine has an acute sense of smell. Whenever a number flashed on screen during the film, you had to scratch the number on the card to get that particular smell. The smells ranged from normal things like pizza, roses, and leather, to more things you wouldn't normally smell like skunk spray, gasoline, glue, and a fart.