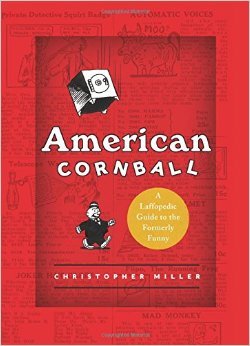 Why do anvils fall from the sky? And backseat drivers make us cry? What do these old jokes mean?
Advertisement:

American Cornball: A Laffopedic Guide to the Formerly Funny is a 2014 non-fictional book by Christopher Miller, which acts as a handy reference pool for many old comedy tools and tropes.

Miller revisits nearly 200 comic staples, and explains their originals and the context of their humor, and why they were funny then and not so funny now.