Series / Stuck in the Middle 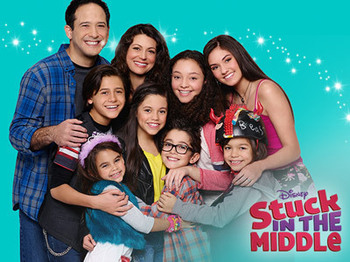 Stuck in the Middle is a Disney series that began airing in 2016 about a large Hispanic family, with seven children. The main character is Harley, the third of four girls and the fourth child overall, leaving her, well, stuck in the middle.
Advertisement:

The show is rather unusual compared to other Disney Channel Kid Coms. Unlike other shows on the channel, it is a single-camera sitcom with no Laugh Track, the first since Jonas in 2009, and the first since Phil of the Future to not be produced by It's A Laugh Productions. Furthermore, the set of the house is much messier than most other homes, and there is a substantial amount of Parental Bonuses.