Series / The Most Extreme 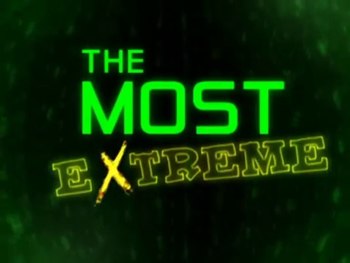 The Most Extreme
The Most Extreme is a long-running documentary television series on the American cable television network, Animal Planet. It first aired on July 1, 2002 and ran until July 3rd, 2007. Each episode focuses on a specific animal feature — strength, speed, flirtation, appendages, diet, etc. — and examines and ranks 10 animals that portray extreme or unusual examples of that quality. The rankings are not arrived at by a scientifically rigorous process; they serve only to give a broad depiction.
Advertisement:

Along with each animal on the countdown, the program presents a computer graphics segment which compares the animal's ability with something equivalent in humans by computer animation in green (in the short-lived half-hour mode, blue) also color of both logos, followed by an interview segment with people who share some common trait.

The series is made in New Zealand by a small production team at NHNZ. As of March 2008, there have been 77 episodes (76 regular episodes and one compilation special).

Tropes used for this series:

Tropes used for each individual episode:

Episode 33: Battle Of The Sexes

Episode 77: The Best Of the Best