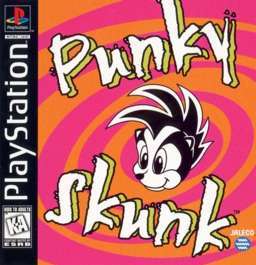 Punky Skunk (also known as Cooly Skunk in Japan) is a Playstation game originally developed and planned to be released on the SNES, but it was decided that it would released on the Playstation instead because at the time, the Playstation had been out for a while and the SNES era was on its last legs. However, the prototype for the SNES version was eventually dumped in 2020. The PlayStation version was released in Japan in November of 1996. The game was eventually released in the United States, but it wasn't released until February of 1998, a year and a few months after its original release. Since it was released when most games were coming out in 3D, many people didn't think much of this game since Side View games were becoming far less common. Because of that, it's seen as a Cult Classic by a handful of people.

As the title says, you play as Punky, a skunk that wants to stop Badler, a wolf and his crew, the BB Brigade, from destroying his island home. Kelly, a rabbit, and Nash, who is also a skunk, ensure Punky that they will help in any way they can. After you clear the first island, Commander Chew, The Dragon to Badler, kidnaps Nash because he's been making gadgets to aid Punky in his quest. After he is kidnapped, Kelly informs Punky, who was looking for Nash, that he was captured and that he's been taken to one of the many islands. So it's up to him to find Nash and rescue him from Badler and Commander Chew.