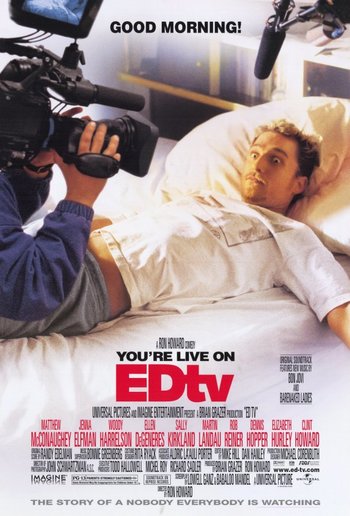 EDtv is a 1999 satirical comedy/drama film directed by Ron Howard, starring Matthew McConaughey, Jenna Elfman, Woody Harrelson and Ellen DeGeneres, about a man who finds himself thrust into the world of reality television — and all the benefits and challenges that come from it. It is a Foreign Remake of the Quebecois film Louis 19, le roi des ondes (1994).

Ed Pekurny (McConaughey) is a video store clerk in San Francisco who dreams of being a star. When the television channel True TV commissions a new reality series that will chronicle a person's life from "dawn to midnight", Ed and his brother Ray (Harrelson) jump at the chance to get their names in the spotlight. The staff at True TV, led by broadcast manager Cynthia Tapping (DeGeneres) and station manager Mr. Whitaker (Rob Reiner), intend to show everything that happens in the candidate's life, and choose Ed after seeing him audition.

The resulting show, "EDtv", is launched to poor reviews and public reaction, and is in danger of being cancelled. However, on the third day of broadcasting, Ed (along with his cameraman) discovers that Ray has been cheating on his girlfriend, Shari (Elfman). In a moment of weakness at Her house, Shari insults Ray, and tells Ed she has feelings for him. Ed then kisses her and forces the camera crew out, which leads to the show gaining newfound exposure in the public eye, and making it extremely popular. As Ed becomes a media darling, several of his friends (including Shari) stay away from him for fear of being publicized. The True TV staff also use a number of tricks to increase the show's ratings, including bringing on an actress named Jill (Elizabeth Hurley) to try and seduce Ed on TV, and following Ed's friends and family around in the hopes that they'll do something unexpected. Eventually, Ed must figure out how to break out of the show and try to resume a normal life, free of the cameras and fame.

EDtv was part of a wave of films released in the late 90's that dealt with the concept of "cinematic television" (others include Pleasantville and The Truman Show). Although different to anyone who's seen both, EDtv and Truman were widely compared at their time of release due to their (at the time, almost unique) plots about a guy whose life is turned into a television show. The main difference between the two films was that Ed was an active participant in the show, inviting the camera crew to come with him whenever he would do something, and using his fame to subvert the expectations of both the audience and the producers. EDtv also predicted the reality television boom of the early 2000s by portraying an average person being filmed at set hours of the day (a concept that has been used to great effect in several reality shows, including Big Brother).