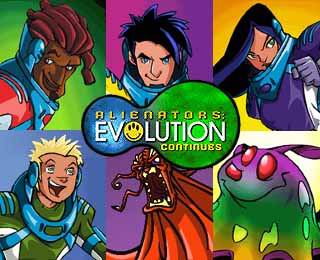 Alienators: Evolution Continues (a.k.a. Evolution: The Animated Series for British audiences) was an animated series that ran from 2001 to 2002 on Fox Kids, based on the 2001 movie Evolution. The story picks up after the events of the film, following the continuing adventures of Ira Kane, Harry Block, and Wayne Grey, and also introduces a fourth hero in the form of a Blue Beret soldier named Lt. Lucy Mai and a Team Pet named Gassie, as well as SCOPES, leader of an army of Starfish Aliens called the Genus.