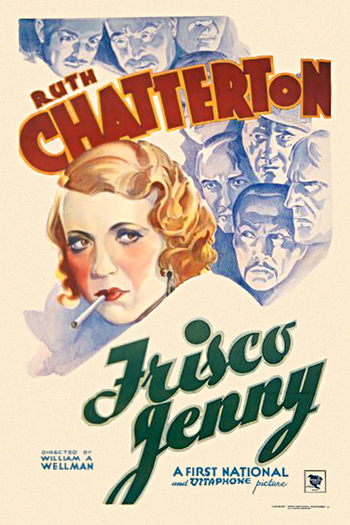 Pregnant and alone after the 1906 San Francisco earthquake, Jenny Sandolvar (Chatterton) tries her best to make ends meet for her son, Dan. But after being arrested for being part of a cover-up murder, Jenny gives Dan up to the prosperous Reynolds family to hide him from child services. However, she realizes he’s better off without her, so she lets him stay with the Reynolds for good.

Twenty years pass, and Jenny has watched Dan (Donald Cook) grow up into a prominent lawyer, who’s now running for district attorney. She has kept her distance all these years to protect him, but her business partner, Steve Dutton (Calhern), gets caught running bootleg alcohol under Dan’s new no-corruption policies, and Steve’s willing to expose the truth to Dan to avoid jail time. Jenny kills Steve, and in a strange twist of fate, Dan prosecutes her, sentencing her to death.

Frisco Jenny bears resemblance to another Chatterton vehicle called Madame X (1929), where a woman must give up her illegitimate son, and he ends up being her defense lawyer years later.