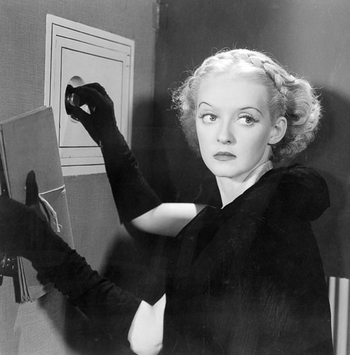 Arlene Bradford (Davis) is a hell-raising party girl accustomed to living it up in San Francisco, which is not called "Frisco" by anyone who lives there. She appears to be retiring from her fast-living ways, however, having gotten engaged to Spencer, a dull banker. Her step-sister Valkyr Bradford (Margaret Lindsay) is trying to get Arlene back into the good graces of Val's father and Arlene's step-father, papa Bradford, an executive at Spencer's bank. Val also is feuding with her boyfriend, Tony Sterling, a reporter who keeps writing up Arlene's escapades in the newspaper's society pages.

Why do Arlene and Val have the same last name despite only being step-sisters? And what kind of name is "Valkyr"? The world may never know.

In any event, events prove that Val should have listened to her father. Arlene is not only not changing her ways, she is getting into bigger trouble than ever. It turns out that Arlene is enmeshed in a plot to steal bonds and securities from her stepfather's bank. She has stolen some $800,000 in securities and passed them on to Jake Bello, a sleazy nightclub owner and her partner in crime. Her supposed fiancé Spencer is nothing more than a pawn in her scheme. She's also carrying on an affair with one Joshua Maynard, another senior executive at the bank.