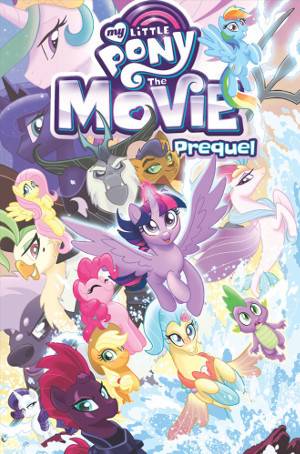 My Little Pony: The Movie Prequel is exactly what it sounds like: a limited comic book series that serves as a "prequel" to My Little Pony: The Movie. It is published by IDW Publishing, and is written and illustrated by Ted Anderson and Andy Price, respectively. The comic spans four issues, each shedding light on one of the new characters featured in the film: The Storm King, Captain Celaeno, Capper, and Tempest Shadow.

The series was first unveiled in March of 2017, and was released from June through September that same year. See also The Stormy Road to Canterlot, another "prequel" and junior readers' novel that adapts and expands Tempest's issue.