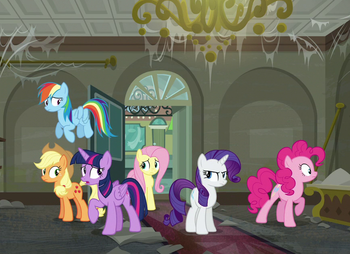 Big store debut within a few hours. What can possibly go wrong?
"What would Rarity want?!"
Written by Nick Confalone

Rarity's friends all rush towards Carousel Boutique in Ponyville, eager to stop her from reading a review of her new "Rarity for You" shop in Manehattan. The Mane Six are all quite worried that the review will have Rarity and her shop come off badly, so they want to intercept a newspaper before Rarity can read it. But, when they arrive, Rarity already has a paper, and insists on reading the review together.

The Mane Six recall giving interviews to a newspony in a diner, where they retell the opening of the shop. The space Rarity wants to inhabit is beset with a lot of problems, and she insists on opening that night despite the disrepair. In addition to that, the landlord of the building, Mr. Stripes, demands that Rarity hire his daughter Plaid despite her lack of business sense. Upstairs, on the building's top floor, DJ Pon-3 is holding a loud rave that creates a very uncomfortable atmosphere. A family of raccoons has taken hold of the stockroom, and they refuse to leave, despite contaminating the store with the smell of garbage. When Rarity's clothes arrive, they're all a disorganized mess in their boxes, and Coco Pommel says that she can't work the opening as she promised because she's come down with a bad cold. With all of the problems, Rarity begins to stress out, saying that her new opening is doomed.

The Mane Six all offer to help Rarity make the opening work; Pinkie will tone down the music, Applejack will rein in Plaid Stripes, Rainbow Dash will hire new help, Fluttershy will deal with the raccoons, and Twilight Sparkle will organize the clothes, all while Rarity works on a window display. The Mane Six all take to their tasks, but they all keep wondering what Rarity would want, as opposed to what they think would be best, so all their attempts backfire: Pinkie tricks DJ Pon-3 into playing some boring shopping music but she just remixes it, Rainbow Dash can't decide on which of the fashion applicants to pick, Applejack tries to gently reject Plaid's idea (spoon-based clothing items) which only earns the wrath of Mr. Stripes, and Fluttershy's attempt to get the raccoons to leave ends up with her being chased by them. As the troubles continue to escalate, Twilight desperately locks Rarity in the window display with a chair propped up against the door, with the Mane Six surveying the disaster. They finally all admit they only did what they did because of what they hoped Rarity wanted, and realize that Rarity would want them to do it their own way.

As the opening approaches, Rarity is finally let out into the shop, to find that Pinkie hired DJ Pon-3 to host music in the store, Rainbow Dash has hired three new assistants, Fluttershy has convinced the raccoons to clean up and serve snacks, Applejack has found a practical use for Plaid Stripes's spoon clothes idea, and Twilight has neatly organized everything in an easy-to-find way. The review ultimately gives "Rarity for You" a positive rating, despite calling the Mane Six "a ragtag group of ne'er-do-wells" who were a bit chaotic in their execution.