Recap / My Little Pony: Friendship Is Magic S6 E9 "The Fault in Our Cutie Marks" 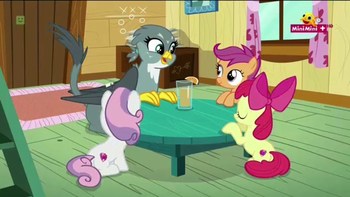 "I'm just about the most excited any griffon has ever been about anything!"
"What do you think my mark will be? A lightning bolt? An erupting volcano? I don't care if it's a jar of marmalade! I know I'll love it, whatever it is!"
—Gabby
Story by Josh Haber and Meghan McCarthy
Written by Ed Valentine
Advertisement:

After helping a young filly realize what her cutie mark means (or rather, helping her parents), the Cutie Mark Crusaders head back to their clubhouse, recounting all the ponies they helped find a cutie mark or learn of their special talents. Just before they arrive at the clubhouse, Apple Bloom sees a griffon perched on top of the clubhouse, looking for them. She introduces herself as Gabby, an enthusiastic, happy-go-lucky mail carrier from Griffonstone who wants nothing more than to get her own cutie mark. After learning of the way the Cutie Mark Crusaders help ponies with their special talents, Gabby flew to Ponyville to seek them out for help. While the Crusaders are willing to help Gabby, they confide in each other that they're not sure if griffons can even get cutie marks.

While Gabby goes off to deliver a letter from Gilda to Rainbow Dash, the Crusaders ask Twilight Sparkle about their problem. Twilight confirms that no griffon has ever received a cutie mark, which further sinks the Crusaders' hopes. Scootaloo vows to try and help Gabby anyway, provided they word things very carefully with her. Even so, Gabby still mistakenly thinks the Crusaders are promising to get her a cutie mark. The Crusaders try their usual tricks, first having Gabby try lots of things to find out what she's good at, then focusing on it. However, she proves to be skilled at everything she tries, making it impossible for the Crusaders to figure out her special talent. Scootaloo finally admits to Gabby that the Crusaders can't help her, and she comes close to tears before flying away. The Crusaders try to apologize, but Gabby is already gone, leaving the three fillies feeling like failures.

Gabby eventually returns to the clubhouse, showing that she got a cutie mark after all; it's a cauldron, from helping Zecora with potion-making. The Crusaders are overjoyed, saying they should rush to Twilight's castle to tell her. Gabby nervously says that she has to deliver another letter before quickly flying away, the Crusaders running ahead to tell Twilight. However, Twilight says Gabby had already stopped by, but she only left a note and didn't stay long enough to show her mark. Puzzled, the Crusaders go out to look for Gabby and find her helping a pony move his cart out of a muddy rut. Gabby slips and falls in the mud, which causes her cutie mark to wash away. She admits to faking it in order to make sure that the Crusaders didn't feel like failures after all they did. This gives the Crusaders an idea, and they tell Gabby to meet them back at the clubhouse.

Once there, the Crusaders tell Gabby that even if she can't get a cutie mark, they can still help guide her towards what she's good at. For Gabby, that appears to be helping people. They say that a pony's special talent isn't what they're good at, but what makes them feel good. They give Gabby a pair of clips (styled after their own cutie marks) for her mail bags, induct her as the first griffon member of the Cutie Mark Crusaders, and throw her a cuteceañera in the town square. Gabby promises to spread the Crusaders' brand of happiness to the rest of Griffonstone, and they ask her to visit again soon.