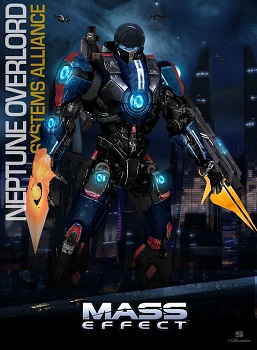 The Hunters of Death

is an Alternate Universe Mass Effect/Pacific Rim Fusion Fic written by Desert Chocolate. It takes place after the end of the Pacific Rim movie, with Jaegers, Drifting, and Kaiju continuing to play a huge role in Earth's history and military prowess. So when the First Contact War comes along, the civilizations of the galaxy meet an Earth with some very powerful back-up...

Though the story starts out much the same as the original games, it very quickly goes in a completely different direction. One very obvious change is the fact that there are two Shepards, male and female. One raised in space, the other in the ghettos of China. The differences that are caused by their different backgrounds are one of the things explored in-story.

The story also has a lot of characters in it, some who were mentioned, but didn't appear in game, other who show up far earlier than usual.

Also has a Spacebattles thread

(Since writing this story, he has also written Through a Temple, Adorable Murderbeasts, and Saiyan In Brockton.)

Currently, the fic is abandoned, with Desert Chocolate working on a rewrite called Hunters of Death: Prey

, which fuses the Godzilla franchise in as well. Spacebattles thread here

"Hunters Of Death contains examples of:"